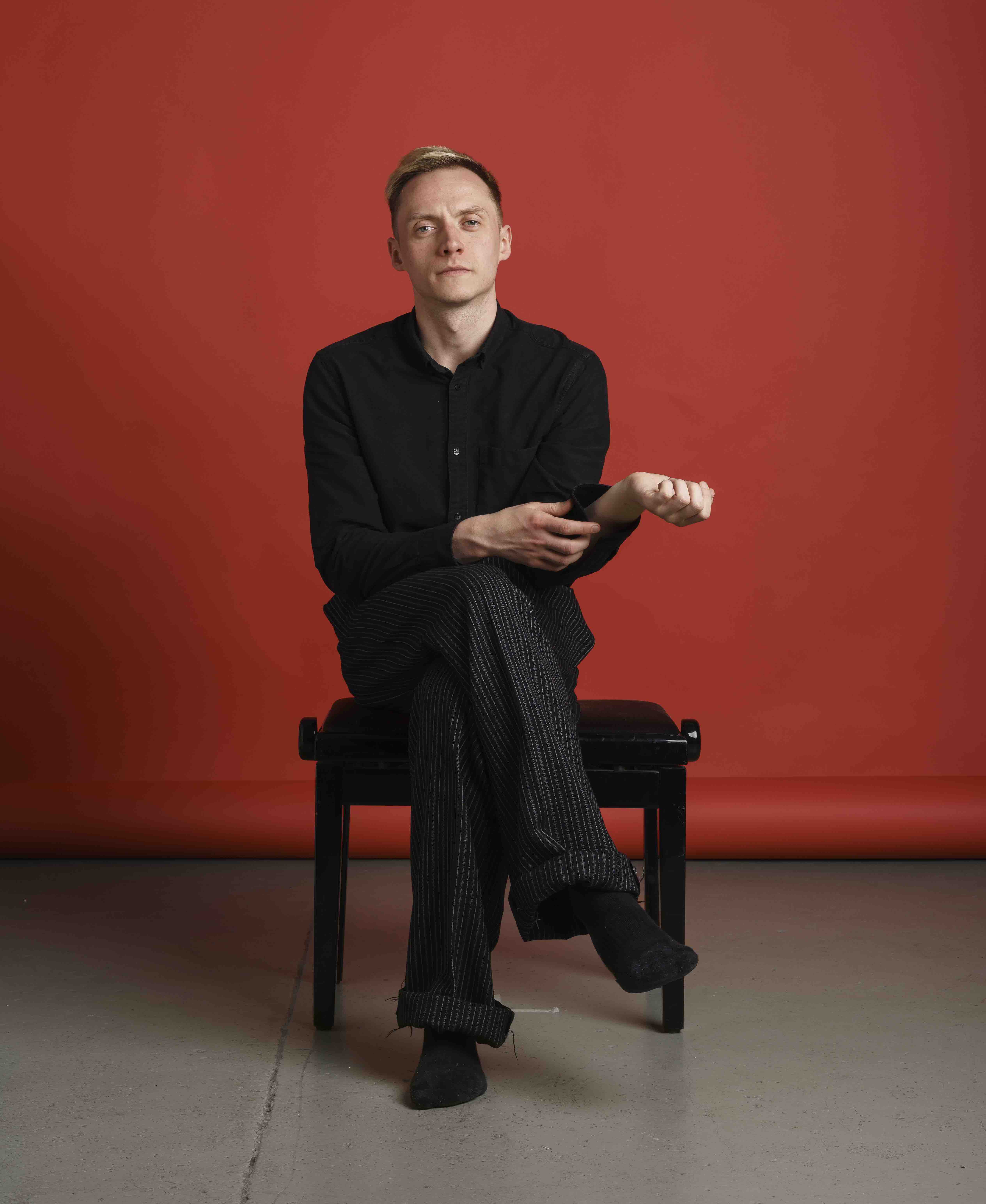 ‘Caterpillar’ is the brilliant new single and video from Edinburgh musician Hamish Hawk. The propulsive, magnetic ‘Caterpillar’ – which has been playlisted at BBC 6Music – is the first single to be taken from Hawk’s new album ‘Heavy Elevator’, due later this year, which has been produced by Rod Jones (Idlewild) and was recorded at Jones’ Post Electric Studio in Leith.

“As far as vocals and lyrics were concerned, I was going for the intrigue of Marianne Faithfull’s ‘Broken English’, the unrelenting intensity of Joy Division’s ‘She’s Lost Control’, and the sensuality of Amanda Lear’s ‘Enigma (Give A Bit Of Mmh To Me)’,” says Hawk of ‘Caterpillar. “I was aiming for the jugular.”

Referencing surrealist painters and with a nod to ‘Stop Making Sense’ era David Byrne, the ‘Caterpillar’ video features a mesmerizing physical performance from the wildly charismatic Hawk. The video was directed by Ellen De Faux of LS Productions, who has been nominated for a 2021 GRAMMY as one of the producers of Harry Style’s ‘Adore You’ video.

Comments Hawk: “Ellen and I both wanted a video that was uncomfortable, panicked, claustrophobic, that also made sure the audience’s gaze is ultimately fixed on, and endeared, albeit somewhat unwillingly, to the character of Hamish Hawk (whoever he is). We had the same set of touchstones: surrealist painters – particularly Magritte, Dali and Escher – the split personality of Dr Jekyll and Mr Hyde, and of course, the exquisite gyrations of David Byrne. I couldn’t be happier with it. It makes me squirm. I stare into my own eyes and barely recognise the guy.”

Discovered by Kenny Anderson (King Creosote) and mentored by Rod Jones, Hamish Hawk has been making music for several years, though ‘Heavy Elevator’ marks a huge leap forward for the graduate of St Andrews University. For the first time Hawk has written with Andrew Pearson (guitars) and Stefan Maurice (keys, drums), who form the core of his band. “Heavy Elevator is the most comprehensive Hamish Hawk release so far and is definitive of the kind of songwriting I want to be involved in,” he says.

Drawn to songwriters of lyricism and wit like Leonard Cohen, Morrissey, Jarvis Cocker and Randy Newman, the musician who has influenced Hawk most profoundly is Stephin Merritt of Magnetic Fields. “His albums, and the songs therein, are entire universes in miniature, scaling the highs and lows of human emotion and experience, and Merritt manages it all with nuance, sensitivity, and no small amount of wit,” says Hawk, for whom humour forms an intrinsic part of his work. “I find an irritating feature of a lot of contemporary music is its tireless sincerity. Humour is a big part of my life, and I believe it is inherently related to truth and deserves to be given the chance to voice itself in songwriting, just as it should in all other artistic fields.”

Hawk met Kenny Anderson while he was still at St Andrews University, where he and some friends had put on a King Creosote gig. Hawk gave Anderson a CD which contained 10 of his songs, and an impressed Anderson encouraged Hawk to print the CDs professionally and pursue a career in music. He would regularly put Hawk on the bill at Fence Records gigs in Fife, where Hamish found his confidence as live performer.

Comments Anderson: “When he plays, Hamish combines wild eyed surprise with an all-knowing smile. Not only does he look startled at his own turn of phrase, his lyrics take on new meanings once you feel you’re already in on the joke. It’s a great trick. And the tunes are GOOD.”

“I transport myself to the birthplaces of my songs when I sing them live, it’s the only way I can make sense of them down the line,” explains Hawk. “Go as loud and brash and big and bold as you can. I find it’s also an approach that’s prevented me from taking myself too seriously. The band stop me from going full Ethel Merman. We have an understanding.”

Hawk met Rod Jones at the Iona Village Hall Music Festival in 2016. Jones mentioned he’d be interested in recording some sessions at his studio in Edinburgh and, says Hamish; “One session became a couple of sessions, a phone call here and there became pretty regular contact, and an acquaintance became a producer, a producer became a mentor, a mentor became a manager.” Their long collaboration has resulted in ‘Heavy Elevator’, destined to be one of the most intriguing rock albums of 2021.