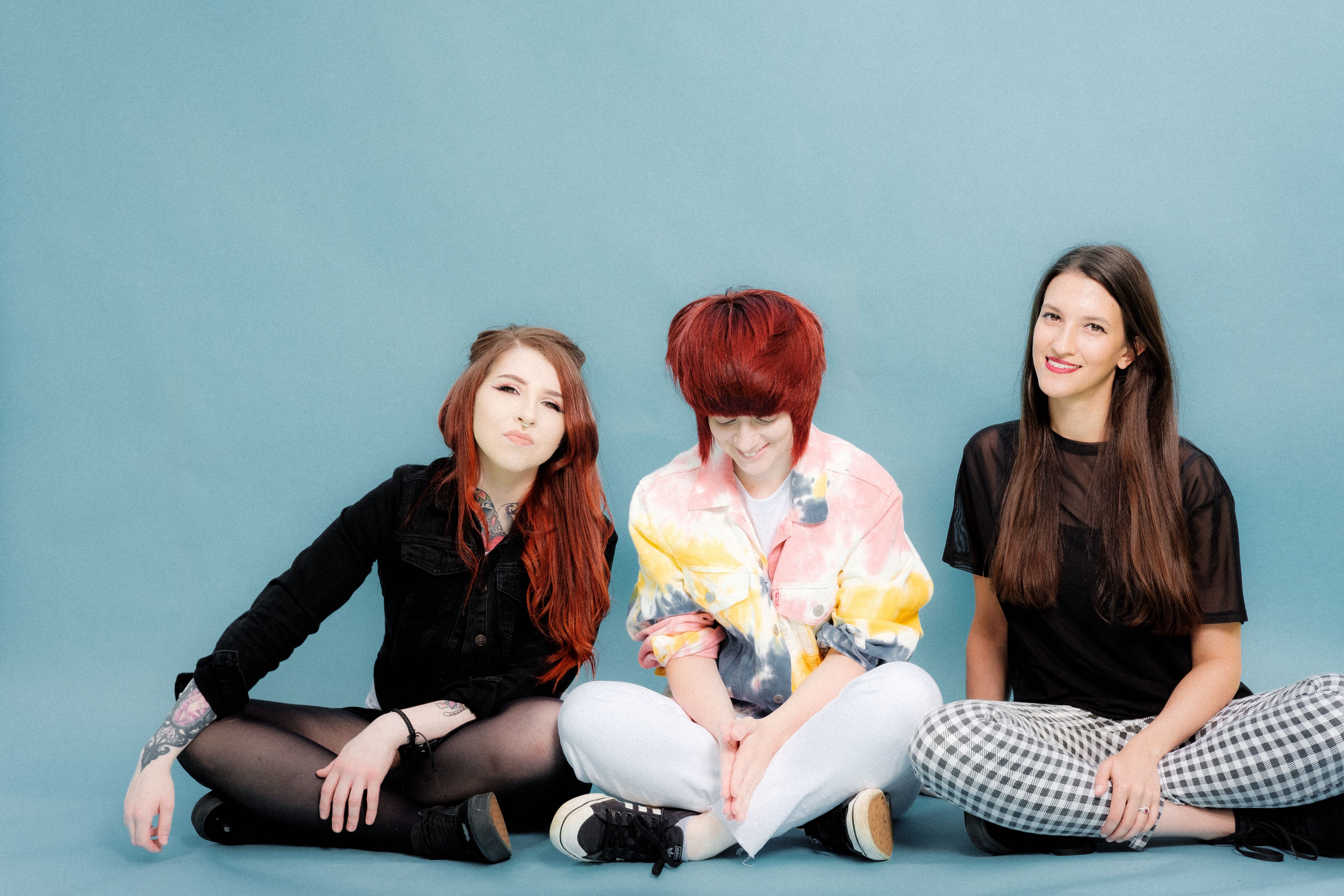 IDESTROY – Bec Jevons (vocals, guitar), Nicola Wilton-Baker (bass, backing vocals), and Jenn Hills (drums) – fuse equal parts NYC proto punk, 90’s Riot Grrrl, the sloganeering of The Clash, Manics and The Sex Pistols with an injection of fresh contemporary energy. Rife with swearing and sarcasm and steeped in camaraderie and attitude, ‘We Are Girls’ is a party-punk album made for moshpits – or, for now, pogoing at home. Dig deeper, however, and there’s sharp commentary in its ten spiky songs, from the ‘hands-off’ warning of ‘Petting Zoo’ to the title track’s ire at the obstacles faced by female musicians.

“I wanted the songs to address issues that are important to us,” says Bec. “The experiences we’ve had as an all-female band – turning up to play gigs and being asked for our tickets or being given shorter soundchecks than boys on a bill – had been on my mind for a while. It’s vital to me that the songs have meaning. Not least because it makes them more fun to perform.”

Since forming IDESTROY in 2015, the trio, who met as students at BIMM Institute Bristol, have played more than 300 gigs across the UK, Europe and Asia, selling out shows in South Korea and multiple tours in Germany. Two acclaimed EPs arrived along the way – 2016’s ‘Vanity Loves Me’ and 2018’s ‘Pure Joy of Life’ – but ‘We Are Girls’ marks a significant step up. For the first time on record, their scorching singalongs sizzle with as much energy as the band on stage.

The album was recorded at Bristol’s West Street Studios, co-owned by drummer Jenn and her husband, who masters for Sony. “We gave my husband our song G.O.D. and a Dream Wife track for reference,” says Jenn. “It was a test to see what he came up with – and he passed! When the three of us met up to listen, it was so exciting. We knew straight away that this was the sound we’d been searching for. Thankfully, he agreed to do the whole album.”

‘G.O.D.’ is the album’s snarling opener, about a falling out Bec had with a friend, which sets the fast-paced template for an album that lasts little over half an hour, but packs in everything from tales of touring and bouts of depression to sexism, Bec’s hypochondria and telling themselves off for dressing a mess. While the subject matter bounces back and forth from serious to silly, the energy never drops.

IDESTROY was formed impromptu at a party, when a drunken Bec played Jenn some of the songs she’d been writing since the age of 16. Nic joined when the band’s original bassist quit. From the outset, their focus was on playing live, but last year, with a rare four weeks free from touring, Bec sat down to write a debut album and realised how much she had to say.

“We Are Girls was the first song I wrote, which is partly why it’s the album title,” says Bec. “It distils all the preconceptions and patronising attitudes we’ve endured as a female band. Being told to smile, being called cranky, people’s surprise when they discover we can really play.”

‘Petting Zoo’ was written after Bec was groped twice in a matter of months, first on a hiking trip, next in a nightclub. “The club was the final straw,” says Bec. “A mixture of emotions overcame me – shock, anger, violation. Most startling was the confusion and helplessness I felt. What do you do in that situation? Petting Zoo is for everyone who’s had enough, who is tired of being leered at, sexualised and touched without consent.”

The only old song is live favourite ‘Lemons’, which has been re-recorded. Only a handful had been aired at gigs before the pandemic brought a halt to IDESTROY’s packed schedule in the spring. When gigs eventually return, with this new batch of songs IDESTROY will be irresistible.