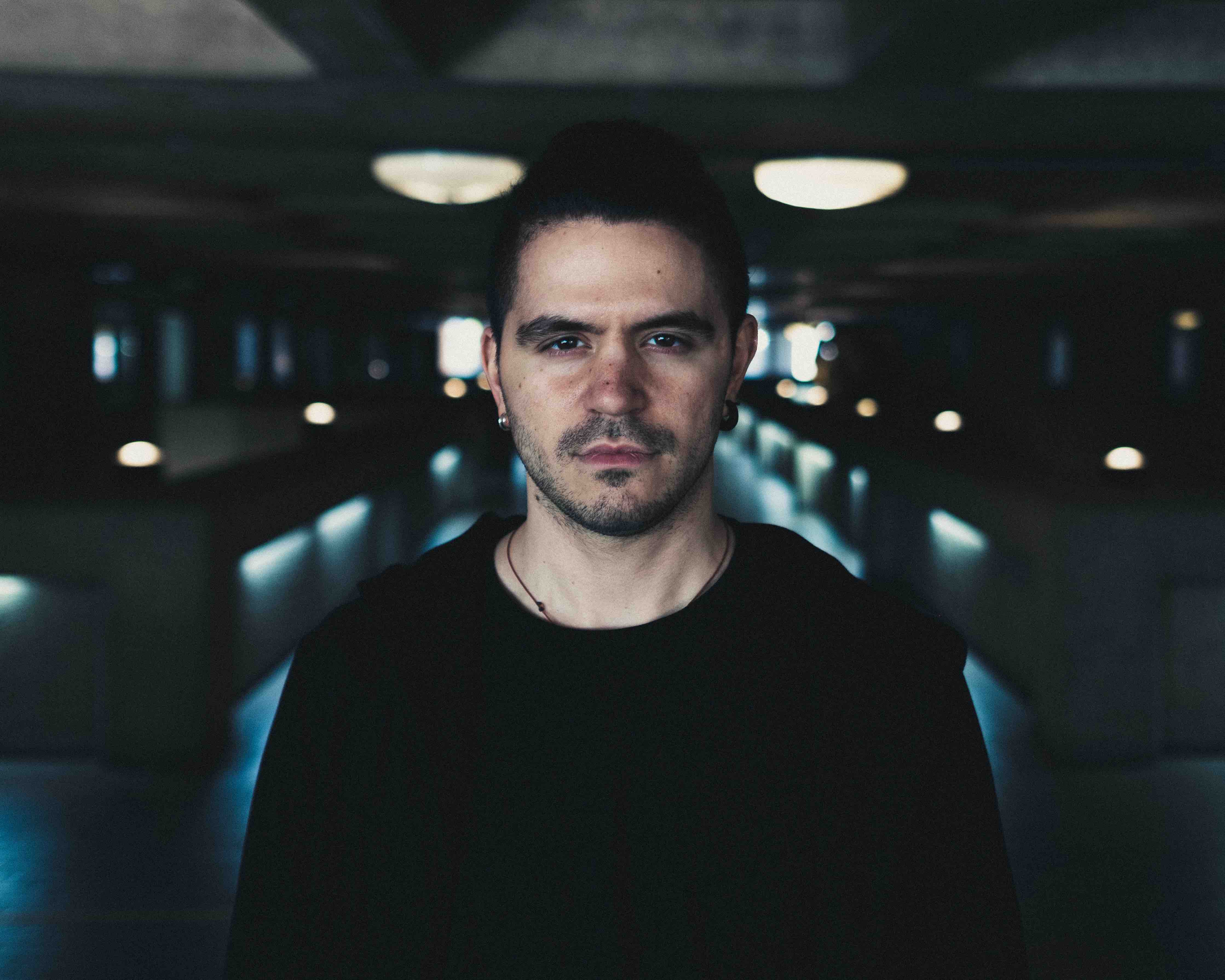 “My experience is that life has very low lows and very high highs. You always get both going through life. I wanted to offer a vision where you can empower yourself, if you fight through it.” Taurian

If you’re a Romanian multi-instrumentalist drawn to London via a sound engineering degree in Manchester, equally in love with trip-hop and industrial metal, your music was always unlikely to be average. There’s little else to prepare you for the emotional impact of Taurian’s stunning debut album. A record that makes you stare into the abyss before encouraging you into the light, often within the same song, Taurian’s self-titled odyssey has a musical breadth to match his all-encompassing lyrical landscape.

The 10 tracks on Taurian prowl from Portishead to Pantera via the visceral thrills of Twenty One Pilots, Four Tet and Jon Hopkins’ atmospherics, topped off with a hard-won wisdom rarely experienced outside of a Nick Cave album. It’s far from easy listening, yet it’s frequently joyful and is one of the most compelling albums of redemption in recent years.

Few bands are as capable of offering the ambient pop soundscape underpinning ‘Deathshead’, the anguished blues of ‘Hysterica’ and ‘Guilt’s explosive energy. Taurian wrote, played and produced the whole album himself. Resembling a dream collaboration between Disclosure and Trent Reznor, ‘Mirrored’ is a beautiful sad banger as Taurian seeks forgiveness, while the hypnotic rumble of ‘Adore’ states there is “no escape except through death” before showing how to plot your escape from turmoil as Taurian croons: “You have to go through this shit to come out the other end.”

‘Fire In My Veins’ is similarly motivational, its empowering message offsetting ‘Twisted’s deliciously dark power ballad. All human life is here, on a record made all the more remarkable for being crafted during lockdown at Taurian’s home in London. It certainly shows there’s more to life than the repetitive oppression of a global pandemic, and was started just before the impact of coronavirus, following the break-up both with his band and with his partner at the start of the year.

Taurian has kept his nickname given by his girlfriend while a student at The School Of Sound Recording in Manchester, in honour of his star sign. “Being Taurus means you have single-mindedness and the ability to really focus on something,” says Taurian. “We don’t give up on something until we’ve achieved it.”

That’s certainly been the case for Taurian, ever since he came to England from his home “between two mountains” in Romania, where he grew up on the music his Rammstein-loving father introduced him to while working as a hard rock DJ at a radio station.

The oldest song on the album is first single ‘Scream’, written in Manchester and something of a touchstone in showcasing the variety of Taurian’s talents, in its slow build from sinister Prodigy menace to a cathartic chorus. “It’s a good introduction to what I do,” Taurian explains. “It hits me as hard now as it did when I wrote it, and the way it changes atmosphere defines my sound, to an extent.”

The epic ‘Twisted’ followed, encouraged by Taurian’s then-girlfriend. “I had the shape for the song,” he recalls. “She said ‘No, you can get more out of that song. Try harder, try harder!’ She was right to give me that nudge.” Taurian filmed a video for ‘Twisted’ at the end of last year in Iceland. “A raw experience,” he laughs. “There was a lot of roaming around in nature, before getting naked at -5C in the Icelandic winter.”

But then Taurian and his girlfriend broke up, around the same time as his band, hard rockers The Night Suns, lost two band members just as they were getting established on the live circuit. “Failed relationships happen to everyone,” he says. “It seems to happen that I have very intense relationship failures. It’s really disappointing, it’s very sad, but it does lend itself to creating good music. I decided to make the most out of the experience and let it all out of me. I was totally honest. I didn’t think for a moment about trying to be cool, I expressed myself and here is the result. Maybe it’s selfish or boneheaded, but I had to be honest, to both myself and to anyone listening. I’m proud of how true the album is.”

It began the spiritual thread of the album, as Taurian and a friend began visiting Tate Britain every day, the musician making notes on how the paintings made him feel. “The art which was the most abstract hit home,” he recalls. “It allowed me to project my own ideas onto the paintings, to express anything I wanted from viewing these intense, dark combinations of colour. Whatever came out of me was whatever was going on in my head at the time.”

‘Guilt’ and ‘Adore were “happy accidents” built from initially simple rhythms, Taurian recalling they arrived so quickly it was as if someone else was guiding his hand on the instruments. The pitch-black lyrics for the deceptively melodic ‘Deathshead’ were written in the early hours walking home from a bartending job: “A particularly depressing night, when I just had to let the words out.”

If an album made in lockdown recovering from heartache doesn’t sound a recipe for optimism, don’t be fooled. There’s as much beauty as bleakness here. “It’s important not to depress anyone,” emphasises Taurian. “I don’t want to offer just one side of life’s coin. If the album is sometimes dark, it’s because my own fight is on these songs, but I’ve ended up coming through it.”

Real name Radu Constantin, Taurian has never thought about quitting the fight to hone his music since coming to Manchester after getting an offer to study sound engineering when he finished high school in Romania. “It was the only course I was interested enough to leave my country for,” he explains. “I’d started playing guitar at 14. When I joined my first band a year later, we had an opportunity to record a couple of songs at a proper studio. I loved the possibilities of the studio, of one day doing it all myself and going into that world a lot deeper.”

He relished the multi-cultural, cosmopolitan nature of life in Manchester, as well as the diversity of its music scene. “I tend to go through phases,” he explains. “I learned my guitar chops to Pantera, and The Doors is music perfect for the mountains back in Romania. Going through depression as a teenager, it was important to have music which spoke to me. From extreme metal, it’s been grunge, progressive bands, jazz and everything in between, before I discovered trip-hop and dance music in Manchester.”

The single-minded aspect of Taurian’s star sign has helped nurture him through a succession of gig economy jobs alongside music since. “I envy people who knew how they should sound and what they want straight away,” he admits. “I’ve always known it’s music I want, at least. That stupid stubbornness of Taurus can work to my advantage!”

It helped him record his album through lockdown too. “There were moments in lockdown when I thought I was losing my mind, the same as probably everyone else,” states Taurian. “During those times, I needed a bit of distance from the music. Lockdown afforded me that time – the time to go through every song until I got all the details right. I’d set myself a mission to get the album made, which kept me in check and kept me focused though it all.”

Taurian is a searingly honest album from a visionary who, like Prince, can maintain a laser focus on every angle of his music. It took emotional trauma and the grandeur of great art to get here, but there’s little doubt Taurian is an album that will establish its maker as a compelling musician, capable of creating anything. His success is written in the stars.